Here is a rundown of the adventures of Spike the Elf in the Maurer household. 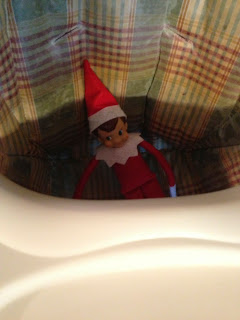 Day 1: Started out pretty simple. He just sat down in a high chair in our dining room that we used at Thanksgiving time(I know too lazy to carry it down to storage). For an obvious spot Spike was not noticed all day until the time of getting ready for bed. Simple and not too glamorous of an entrance. 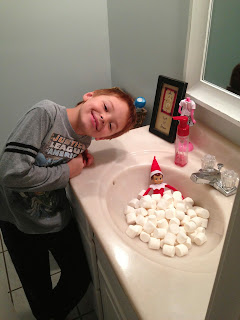 Day 2: After sitting unnoticed all day in an uncomfortable spot he need a soak in a marshmallow bath. He was noticed right away as the kids tried to brush their teeth before school. They were fascinated by the magic marshmallows from the North Pole and took extra caution not to touch. Spike also wrote them a letter back on the paper that they hid the first night. Thank goodness someone overheard the kids talking strategy about hiding the paper to test Spike! This could have proved disasterous. 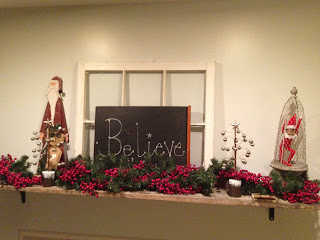 Day 3: Once again he was easily spotted as he accidentally trapped himself on the mantle of Christmas decorations. He somehow got wedged in this container and was trying to break free. It was pretty crazy when the kids were talking about Spike being stuck and he moved his arms while we were all around him. It really startled them all. 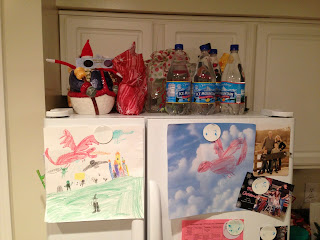 Day 4: Spike moved to the top of the fridge for our next day. He was spotted in record time despite being hard to notice. He was wearing these amazing glasses that turn Christmas lights into 3D shapes and patterns. These particular glasses make Christmas lights look like Snowmen. He was spotted and was in great viewing for the behavior of the kids who were not being the best! Spike took note and took copious notes. 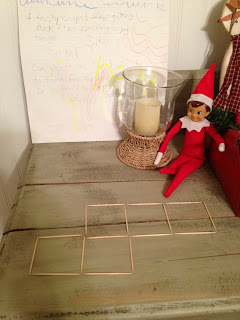 Days 5 and 6: Spike became quite clever with this next challenge. In our dining room he set up a brainteaser. One his note behind the candle it stated that the kids had to move two toothpicks to create four equal squares. If they did this, then they would receive a prize. It took the kids two days of trying before they gave up. Needless to say no prize was given, but brain cells were lost during the thinking process. Spike moved on to another spot and gave them a chance to recover. 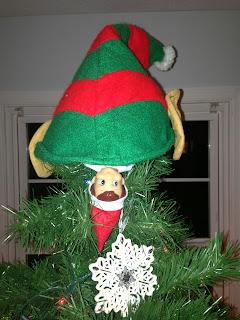 Days 7 and 8: Spike moved on to another hiding spot that he thought would be super obvious, but lo and behold he was stuck idle hiding in the Christmas tree for two full days before being discovered. Spike could not believe that he had to sit upside down for 48 hours. This was one that he thought for sure would be easy after the challenging brain teaser from the days before. 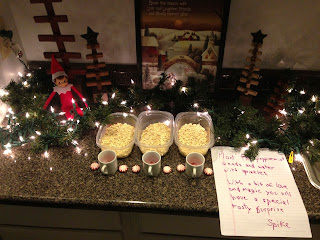 Day 9: Spike returned back to the giving spirit by creating a cool little setup. He asked the kids to plant some peppermint seeds and water with candy sprinkles for a tasty surprise to grow. He set three containers up for each of the kids. Addy and Ava were on this quick and ready to go. Now the kids have to excercise some patience waiting for the treat to grow. What will it be? Only Spike knows....... 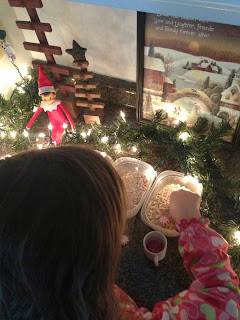 Stay tuned for the prize and the rest of the events to unfold.
Posted by coffeechug at 2:56 PM