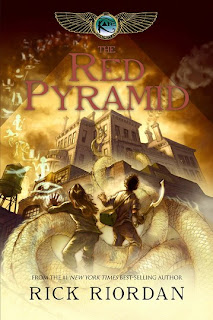 I have finally returned to form and picked up some YA/Middle level books to read. I just completed the latest book from Rick Riordan (author of the Percy Jackson Series). This is book one in the Kane Chronicles. Rick Riordan has moved away from Greek Mythology and tried his wits at Ancient Egyptian mythology. I was very excited for this novel as I have taught ancient civilizations for five years when I used to teach sixth grade. I purchased this book on Amazon through the pre-order. As soon as it came in I was ready to read. This book comes in at a little over 500 pages. It does a wonderful job setting the tone for the series (based on his website there will be two more books). Basically, brother Carter, and sister Sadie, are reunited and must work together after their father blows up the Rosetta Stone and himself(to a certain degree) after trying to make things right. The novel is setup where Carter will give his viewpoint of the story and the next chapter it the story will continue from the perspective of Sadie. Carter and Sadie learn that they have strong bloodlines to pharaohs of the past. They also learn that Set is working on taking over the entire world by building a Red Pyramid that will store all his power and cause him to destroy everything (this would be the chaos realm of mythology). Carter and Sadie are helped along the way by some important characters that really help shape the story and will most likely (in my opinion) lead to future storylines and conflict. My favorite was Khufu, who is a monkey that loves basketball and only eats I items that end in “o” like Cheerios and Oreos. They have an uncle Amos who helps them along with Bast who is in the form of a cat named Muffin. There are several other characters that play important roles as well. I don’t want to spoil anything about this book because that would not be fair to you as a reader.

Did I like the book? Yes, I really enjoyed it. It held my interest throughout. Many things were being developed like with any book that is the first in the series. There are some great battle scenes. There is nothing too graphic at all so I would recommend this to any student who wants to read it. There is nothing bad in my opinion. If you liked Percy Jackson, then this will suit your fancy just fine. I loved the book because I find Egypt fascinating as a culture and I spent time reading up on some of the mythological characters as I read through the book. I give this book two thumbs up and would suggest getting this book right away. Rick Riordan has not lost his touch when it comes to writing and he has stuck to his craft of writing a story that will hold the interest of his targeted audience. Humor is embedded throughout, true facts and historical lessons are presented, and his usual dosage of action scenes will make this book a keeper.

The only thing I did not really like, but did not take away from the story at all was the concept of the storytelling. The book is a tape recording of the two telling their story. I liked having the two perspectives because I think it helped to move the story and was a nice writing touch as there were parts of the story that needed to be addressed that Carter just could not share and be believable and parts that Sadie would not have been able to tell either. It gives the reader a broader perspective. Even though they are related they are two very different people with different strengths and weakness. Anyways, the thing I did not like was when they would make little side comments while one was recording the chapter. It makes sense in why he created the story in this format, but it drove me crazy having the two main characters talk to each other with sly comments as they narrated the story. This element did provide comic relief and many students may actually like this element. I am just a picky reader. Overall, I give this book 4.5/5.0

Posted by coffeechug at 6:01 AM

This is such an incredible book! It's my first Rick Riordan book and I love it! It has an incredible story and just enough humor,too. When I finish this book, I'm going to read The Lightning Thief. If this book is so good, I'm sure the other one will be too! The characters are so rich, and I love the narration switches between the two of them! My favorite character is either Sadie or Muffin.