Thursday was a long day finishing up the school week with parent teacher conferences. I came home after conferences to help out with the cleaning as my parents were on their way to the homestead Friday. Amanda had a rough day taking all three kids to the dentist and then getting stuck in one hour traffic to drop off our taxes. I had planned to ride a bike that night, but that did not happen. I was wiped out and tired.

Friday morning I had every intention to get up and swim bright and early to get the workout out of the way. That did not happen either. Instead I slept in. I had been nursing a tight and pulled groin/hamstring the last few days so I figured the sleep was a sign I needed to give it a rest. I slept in and I felt so much better. I was worn out both mentally and physically. Amanda headed of to school Friday and finished up the cleaning and while cleaning I just could not fight the urge to get a workout in. I kept thinking about what all needed to get done training wise and finally could no longer resist and jumped on my bike.

I had to get in a 20 mile bike ride. The problem I was facing was time. I did a proper warmup and started cranking. My knee felt good so I kept increasing the gears one shift at time. For the first time in over a month I was able to actually ride on the big gear up front. I was able to complete my bike ride in the small window of time before my parents arrived. Thank goodness Ava was sleeping to allow me to ride. Thank you Ava! I have not been able to ride this hard in a very long time. It felt good to feel "normal" on the bike. I still have some serious conditioning issues, but I felt good GETTING IT DONE! I finished just in time for the arrival of my parents and it was a great time spending time with them. We don't get to meet up as often as we would like so when we find time it is nice to just hang out and eat junk food and watch the kids do what they do.

I won't lie my eating has been terrible this entire week. Earlier in the week Amanda bought me my favorite candy of all time. I can polish off a big bag in no time. It is cocaine for my soul. Cherry sour balls are the best sugar bomb ever!

I also ate at Sportsfans and Old Chicago pizza. I could not resist. It was one of those weeks. However, I am focused and ready to eat clean. One can only eat like crap for so long before the body says enough! The body has waved the white flag and it is time.

After my parents Saturday morning I took Aiden to meet about Live Uncommon. There is some great stuff coming with the REVOLUTION and I feel fortunate enough to be part of things. I will throw in more details later, but know that


REVOLUTION Race Team info huddle Thurs 6:30-8:30-Symposium Cafe 53rd & Utica Ridge Rd Davenport. Get in the know, in the gear, on the Team.

After the meeting I came home and took a nap. It was not intended but while watching basketball I fell asleep for a good hour or so. I woke up and felt gross so I headed to the Y for the swim workout I missed out on Friday. The Y was crazy busy and only three lanes were open for swimming laps. Luckily, I was able to share a lane. I could not believe the amount of people. It was weird being there with the sun shining, lots of noise, and lots of people. The water was very cloudy so I was not digging that, but the workout needed to be done.

I hammered out a tough workout and it was the kickstart I needed.

Between each set of 3 I had a 100 kick set. These were tough. The first set I swam at a pace that I felt was easy where I was not tired when I finished. The second set I made sure to be ahead by the first half of the swim and I typically was around my average swim time from previous swims. The last set I tried to swim fast. Not going all out, but it sure felt close. I was taxed by the 100's. I swam with a watch to time for accuracy and that was great to have the interval feature where it counted down the rest to force me to swim on time. I swam the 2900 yards in about 50 minutes. I was in and out with no messing around. It was a great swim and I am glad I forced myself to go.

Tonight after the kids went to bed I headed downstairs to ride the bike. I had long bike ride planned. I was tired and little motivation. I started off watching basketball, but it was not entertaining me enough so I started watching Hall Pass. My goal was 30 miles. Ideally I would like to be over 40 at this point, but I have to ease back into things. My knee was sore during the ride. It would feel good for a while and then hurt and keep going back and forth. Riding 90 minutes about broke my butt. I was glad I got it done. 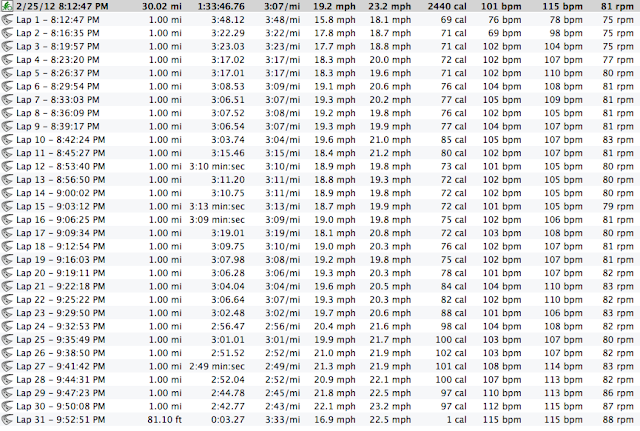 It is now late and I have a 11 mile run early in the morning planned. T-Minus 7 hours and I will be out pounding the pavement to wrap up another good week of workouts. Keep striving to GETTING IT DONE! I am here to help you. Have a good rest of the weekend.